Nesakkaram has created a difference in the lives of thousands of children and their families. A few of these real life cases handled are discussed here. In addition to the categories listed here, Nesakkaram swung into action during the tsunami in December, 2004, thereby reaching out to over 9000 people.

Please visit our photo galleries to get a feel of the children being nurtured and contact us for any queries you may have. 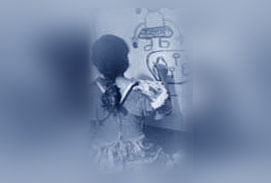 Pallavi (name changed), is a 13 year old girl from Chennai. Her father, an agricultural labourer in a village, sent her to work in his landowner's house at Chennai. She was ill-treated and physically abused, which caused physical and mental trauma in the child. She was given insufficient food,dress and had to work hard for long hours. On 26th of June 2004, when the owner's wife beat her, unable to bear the tortures any further, she ran into the neighbour's house and hid herself in their electric motor room.

The neighbours becoming aware of the commotion and the problem brought the issue to our notice. Our staff immediately reached the spot and rescued the child, who was then brought to our shelter home.

Rahim was in real distress when he came into Nesakkaram. He used to sneak out of Nesakkaram every other day and would go all over the station to look for his mother. His father was an alcoholic and a truck driver. He died in a road accident while driving. Then Rahim's mother went to different cities by rail with him in search of a living but finally came to Chennai to settle down at the station. She started begging to survive.They found the life very tough.

His mother seemed to have told him that they better part company and only then they could survive. And one morning when Rahim woke up at the station, he did not find his mother. He searched and searched. But he could not find his mother. During one such trip,SEEDS volunteer identified him. He was barely five years old.

My name is Mala. I live with my parents and two brothers on the pavement. Though I am ten years old I have not been to school because we cannot afford it. My father was a construction worker. He fell down while working and broke his leg. He could not go for work from then. My mother has been working as a domestic help and feeding all of us. Hence I also went to work to supplement the income. I have to go to some open space to defecate;sometimes people around would abuse

us. I would feel embarrassed and humiliated then. We have only tea for morning breakfast; sometimes mother would bring some leftover food from the houses she works; otherwise we eat only at night. My mother will bring some old clothes from those houses; whether it is to our size or not, whether it is torn or not we just wear them. Our 'house' is open to sun and rain. I have to bath in front of my hut, totally exposed to the road. I can not mind passers by staring at me. When it rains there will be water and slush around my house; it will be very difficult to reach our house. There will be a sharp increase in the battalion of mosquitoes invading at night. We get sick often with malaria and there will be hardly any money left for proper treatment. My dream is that I should go to school and get some job to take care of my parents.

My name is Jaya and I am nine years old. I belong to Adhi Andhra community. When I was six years old my parents died. I live in my auntie's house. I was studying first standard when my parents died. Then my auntie stopped me from going to school. I stay at home and take my auntie's kids. I do all the chores in their house; besides that I go in search of firewood; I go to the market and pick vegetables. I feel so tired everyday after the work; I feel giddy now and then. When I see kids of my age going to

school, I long to get back to school. Even when the teacher from Nesakkaram put me in school, my aunty pulled me out of school. She always put a block to my education. I began to dislike studies; I thought perhaps I am not fit for studies.At this juncture I was approached by a Nesakkaram Staff who encouraged me to study and motivated my auntie to allow me to attend educational classes.

Revathi (name changed) is a 14 year old girl and a IV class school dropout found on the streets of Triplicane. She lived with her parents - her father is a daily wage earner and mother is a domestic worker. The pavement was their home on Triplicane Main Road . Triplicane is a highly populated area of Chennai city very close to the beach. Revathi was addicted to sniffing solvent chemicals.

Egmore Whannels Road is one of our contact centres in Chennai. There are 48 families living on the pavement (platform) of this area and in miserable condition with no basic amenities of toilets, or even a roof over their heads. Most of the men work as coolies and women as domestic workers. Children too were engaged in such jobs and away from school. The major problem and concern among the people here was the evil of gambling. Thus, whatever they earned for their

to receive a pleasurable feeling. This pleasurable feeling is called a 'high' and is similar to the 'high' experienced when smoking Marijuana or taking narcotics. The list of solvents that addicts use to obtain this 'high' varies considerably, but the most popular chemicals consist of glue, gasoline, butane gas, aerosol sprays, bathroom cleaners, and paint thinner. An addiction to solvent sniffing is most prevalent in teenagers and young adults. They are introduced to solvent sniffing by friends, who tell them that solvent sniffing is 'fun'. Left untreated, the person is at risk of dying from Sudden Sniffing Death.

Revathi got introduced to the habit through curiosity when she used to buy the ‘stuff' for her friend. Soon it became a habit that forced her to take two ‘sniffs' a day once in the afternoon and another in the night. Nesakkaram educator Mr. Murugesan's constant interaction with her brought enough confidence in the child and made her disclose her addiction to “sniffing”. It was found that this addiction was the reason for her dropping out from school.

She was then counseled almost daily and individual attention was given. She was occupied with play method activities especially during the ‘urge' time, that is, in the afternoons and in the nights. Her parents were also told and counseled and a watch was kept over her. They cooperated. It took nearly three months to get her out the addiction and fight over her withdrawal symptoms. After successfully overcoming the addiction she is now back to school, continues her studies and is also excelling in tailoring.

The follow-up goes on by Nesakkaram educator as she is now fully rehabilitated and out of the addiction.

living was thrown away in gambling pushing them deeper into poverty. Nesakkaram motivated the women to form into Self Help Groups (SHGs) and take appropriate corrective measures against gambling. The women realized the power of SHG and formed themselves into such groups and took unique actions of reporting the gambling to the police station. Since the complaints were coming from their own women folks, the men could not create problems against them and it made all the more easy for the police to take action, thus putting an end to gambling in that area. This area was cleansed of gambling by their own women self help group.

Apart from this they saw the power of being and coming together as a group and opened an account in a bank as a group and soon started to save money that began to grow and was a source of funding for their own needs. This has made them self-reliant and a sense of security prevailed among them. They also realized the power of education and now they take care that their children attend school while the men are encouraged by them to be engaged in useful trades.

“Marikolundu” is a Women's SHG that was started under the guidance of Nesakkaram in the year 2002. This SHG is in a predominant slum area of Laungs Garden Road of Pudupet, a bustling Centre in the heart of Chennai City . The residents of this area are petty traders, especially women who are in the business of buying and selling flowers. The main finance for them was from moneylenders who charged very high interest rates that have to be returned on the same day. These moneylenders

gave without any security and let loose their muscle power talk when it came to collections. In the weekly meetings of the SHG this issue was addressed to their members and the result was that they opened a savings bank account in a Co-operative Bank, placed their contributions and saw it growing to Rs.48,000/- in a short span of time. Based on this the bank came forward to lend them funds at reasonable interest rates. This was a big relief for them from the clutches of moneylenders who charged exorbitant interest rates and collected the money back from them under threat. With a sizable amount as their savings they were able to lend intra group for their needs from their own funds. One of the resolutions taken in their meetings is that none of them shall borrow from the moneylenders. This has been adhered to very strictly and now all the women in the area have joined the SHG realizing the power of oneness and togetherness. This is yet another testimony of the economic self-reliance of women when they are bonded together as Self Help Groups.

SEEDS has achieved 100% enrollment in 18 centres and thereby eliminating..

We have two computer training centres for women and children.

We provide opportunity for our children to learn the basics of our folk.

SEEDS has achieved 100% enrollment in 18 centres and thereby eliminating..

We have two computer training centres for women and children.

We provide opportunity for our children to learn the basics of our folk.